помогите пожалуйста Английский
Можно и на русском​
Project task Write about an important event in your life. Use these questions to help you. 1 When did the event happen? 2 How did it start? What were you doing? 3 What actually happened? 4 What was the result? 5 Why is the event important? Write about the event. Try to include some contrasting sentences. Illustrate your text with pictures or power. 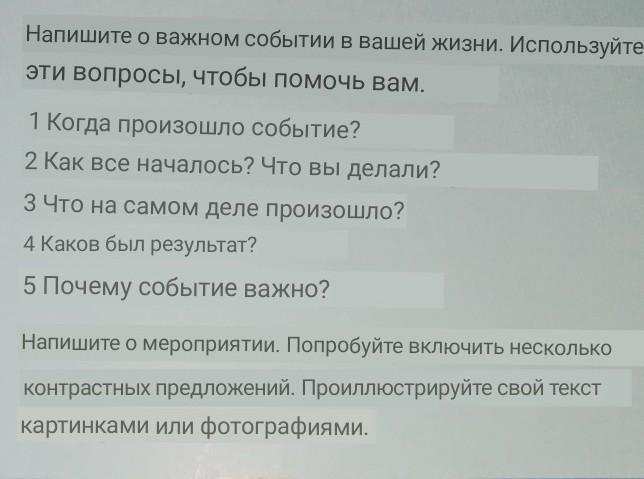 I have long wanted to have a dog. And so, waking up early in the morning, on my name day, I saw a small box near the bed, in which there was a small puppy. I was so happy that I didn’t believe right away if it was really all this happening to me. The puppy was only three weeks old. He looked at me with a questioning glance, asking who would be his master. I took this soft fluffy lump in my hands, and he began to lick my face. In my head, the idea immediately arose to call him Tobik. When I called him by name, he happily responded. He moved around the room funny on his helpless paws, and was constantly shaking. I took him in my arms and hugged him to me so that he would warm up a little and calm down. After a while he got tired and fell asleep. I was so sorry for him that I put him on my lap. Tobik, making himself more comfortable, buried his face in his shirt. Waking up and yawning sweetly, the puppy whined, demanding attention. I thought he wanted to eat and took him to the kitchen to feed him. Having fed him with special food and watered him, I wanted to take him to the room, however, the puppy began to examine our kitchen, sniffing at all the corners. This is how an unforgettable day of meeting my pet passed.